Spring is a great time of the year to renew your commitment to your healthy life.  Read on to learn more about what the beginning of Spring actually means…

There are two equinoxes every year – in March (Vernal) and September (Autumnal).  When the sun shines directly over the equator the length of day and night is nearly equal. Since seasons are opposite on either side of the equator, the northern hemisphere has the “vernal (spring) equinox” and the southern hemisphere has the “autumnal (fall) equinox”. 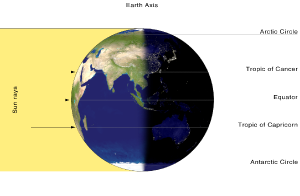 Why is it called the “Equinox”?

Equinox in Latin means, “equal night”, since night and day are nearly exactly the same length – 12 hours – all over the world. Ver in Latin means Spring.

The celestial equator is an imaginary line in the sky that is an extension of the earth’s equator projected into space.  The Spring Equinox occurs the moment the sun crosses the celestial equator from south to north. This happens around March 19, 20 or 21 every year.  Usually the earth’s axis tilts away from or towards the Sun.  It’s only on the day of the two equinoxes that the Earth’s axis appears perpendicular to the Sun’s rays, as shown on the illustration above, making the length of day and night the same.

What about the Winter Solstice of 2012?

Solstices occur three months from the Equinoxes. It’s when the earth is tilted at its maximum toward or away from the sun.

Why is it special?  Have you been living under a rock?  You can blame the Mayans for all the fuss.

The Mayan calendar was created around 3,000 BC and  moves in cycles with the last cycle ending in December 21, 2012, on the winter Solstice.

With the price of gas going up trips might be a little more expensive right now.  When is your favorite time to travel?  I have always found that Fall is the best time to go almost anywhere.

The Southwest is coming out of the thunder storm season, but temperatures are still great.  I remember rafting down the Grand Canyon at that time and it was a fantastic time to be in the canyon.

Traveling overseas is also worthwhile in the Fall, as prices are down, tourism is less and the weather is often perfect.

One nice thing about traveling to tourist destinations in the U.S. in the Spring…you have the opportunity to meet many foreigners!  When I worked at the Grand Canyon and Zion I learned that Europeans were everywhere visiting the U.S. in the Springtime.  Before the schools get out in early June, it’s a great time to meet foreigners right here at home!

View all posts by: admin